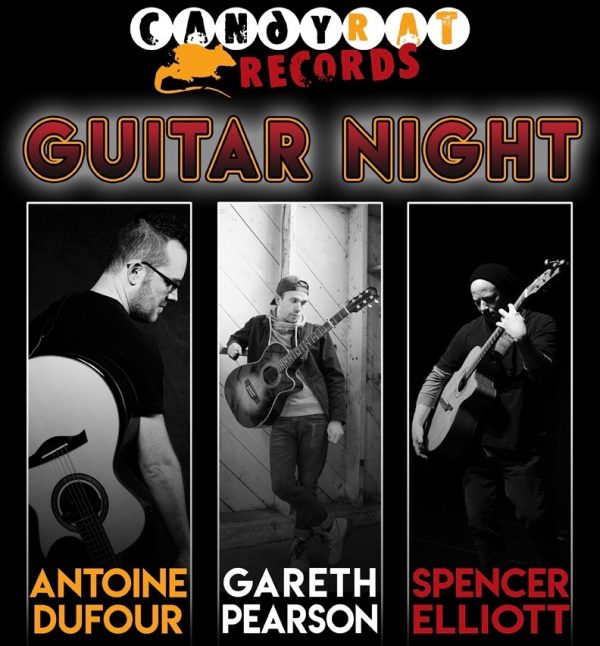 Join us in our Morgantown Showroom for an evening of finger style guitar.

Three artist from Candy Rat Records have come together for an amazing performance.

Door Prize! Win an Autographed Andrew White Guitar. These three artist will sign an instrument as a keepsake from this exceptional evening.

Montreal, Canada based guitarist Antoine Dufour is known colloquially among the best guitar players in the world as a musician’s musician. To fans of popular music, he deftly combines jaw-dropping guitar playing skills and an artistic soul in crafting instrumental compositions that reflect ambient and progressive music that transcends global cultures and languages. That he does this in an incredibly visual and entertaining style has endeared him to a broad spectrum of fans of popular music. With six albums of original material released to critical acclaim, two live performance DVDs, global touring and more than 50 million cumulative views on YouTube, Antoine Dufour has emerged as a star of fingerstyle acoustic guitar, building a worldwide reputation for innovation and creativity.

Gareth Pearson is referred to as “The Welsh Tornado” which is particularly appropriate, seeing as this special talent combines fingerstyle pyrotechnics, with explosive lead runs making Pearson one of the most exciting acoustic musicians gigging today. His distinctive style can be heard through his creative and innovative arrangements which cover a wide spectrum of genres, including country, folk, classical, pop, rock, jazz, swing, and bluegrass music. Drawing his playing style initially from influences such as Chet Atkins, Merle Travis, Jerry Reed, and Tommy Emmanuel, he has developed a style that is both inspiring and entertaining.

Spencer’s compositions contain rich melodic and percussive landscapes that fuse his contrasting influences and place them on full display. Spencer views modern finger style as part of the “Free Space” to borrow a phrase from Ian MacKaye (singer for Minor Threat and Fugazi and owner of fiercely independent record label Dischord Records). It is a place where new and original artistic ideas continue to bloom and are not borne of a profit motive but from a compulsion to be creative.

Tickets Will be held at Will Call under Purchasers Name. Please provide valid ID. All Sales are final, no refunds or exchanges

Let us know what you think...

Only logged in customers who have purchased this product may leave a review.Log in now

What others are saying

There are no contributions yet.

Continue as a Guest

Continue as a Guest